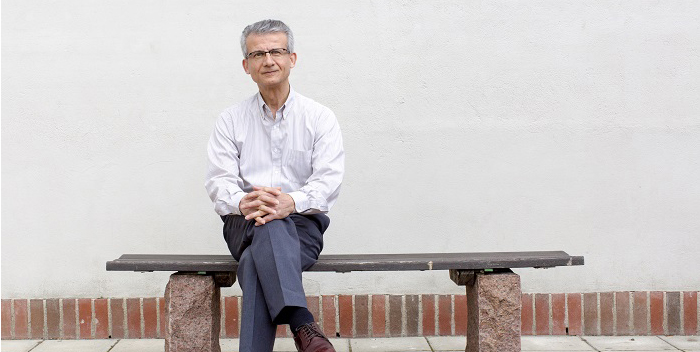 As a teacher, Hemin Koyi wants to create an environment where the students feel totally comfortable: - ‘Teaching is an ability one achieves by learning from those one is teaching’ is my motto. Photo: Mikael Wallerstedt

At the Department of Earth Sciences in Uppsala is one of the world’s foremost tectonic laboratories. Here, millions of years of geological processes such as volcanoes, faults, landslides and mountain formation are examined.
‘Using realistic models, we can simulate the development of geological structures in a few days, or in some cases a few hours,’ says professor Hemin Koyi, structural geologist and director of the Hans Ramberg Tectonic Laboratory, HRTL.

Guest researchers from all around the world have visited the laboratory over the years in order to take advantage of its equipment and expertise. The KoF 2011 international evaluation called HRTL one of the world’s leading laboratories for experimental structural geology. ‘Some of the instruments are unique,’ says Hemin Koyi.

‘For example, we have two high-capacity centrifuges for simulating plastic deformation in the earth’s lower crust and mantle under strong gravitation. Some labs around the world have acquired centrifuges after their researchers have used those in Uppsala. We also have a couple of custom-made pressure rigs, a high-resolution scanner, a viscometer and a number of other instruments to measure the properties of the materials used in the models.’

Researchers at the tectonic laboratories use both geological and geophysical data to simulate various tectonic processes, from the formation of faults and landslides to the creation of mountain ranges when the continental plates collide.

‘But since we don’t work with hard rock, we can shorten the time for these processes from several million years to a few days, sometimes hours,’ says Hemin Koyi. ‘We also don’t need enormously powerful forces to deform our models. We quite simply match the properties of the materials to the forces deforming them to make the models mimicking nature as closely as possible.’

Materials such as loose sand, modelling clay and silicone are combined into physical models. After this, depending upon the tectonic environment to be simulated, the models are pulled apart, pressed together or slid past each other in blocks, so called shearing, in order to simulate deformation found in nature. These experiments are performed with or without changing the temperature while researchers monitor changes in movement, speed, direction and shape. A high-resolution laser scanner is used to takes three-dimensional images.

‘We can simulate different geological processes and monitor how structures are created under such conditions. In this way, we learn about the origin of the structures we see in the nature.’

These days, researchers supplement physical models with numerical data models in order to carry out advanced calculations. Such calculations played a decisive role some years ago when Hemin Koyi exposed the instability of a proposed site for storing nuclear waste in Germany. His investigation was a major reason for the plans being shelved.

‘It turned out that the bedrock contained large blocks of another high-density rock type. According to the model results, these blocks would sink down and deform the planned storage site. If this happened, it would jeopardise the stability of both the storage site and the waste. Model results showed that many parameters have to be considered when deciding whether a certain structure or site is suitable for hazardous waste.’

As a structural geologist, Hemin Koyi thinks he is in a good position. Research on geological structures is important in many areas and often involves collaboration with other experts, including geophysicists, hydrologists, petrologists and engineers.

‘If you work on folded structures which were formed when continental plates collided and pressed against each other, the results can be used by oil companies surveying oilfields, or mining companies looking into how ores are affected by the structures which have formed. In this way, you can obtain a picture of movement and earthquake patterns in a mountain range. Understanding structures created under brittle deformation, faults for example, and how they were formed may be applied to various subject areas and may benefit both industry and society.’

Hemin Koyi’s interest in structural geology was awakened by a university teacher back home in Sulaimany in the Iraqi part of Kurdistan.

‘Professor Rao was a senior gentleman from India who had previously spent many years working for an American oil company but then started teaching structural geology. I remember him as an exceptionally good teacher, very relaxed in the classroom,’ says Hemin Koyi.

He takes the same attitude with his own students.  For a number of years now, Hemin Koyi has taught the courses Structural Geology and Ground Stability, Tectonics, and Presentation and Publication. Students taking the first mentioned usually award an average grade of 4.8 or 4.9 out of 5 in their course evaluations.

‘When I go into a lecture theatre, I try to create an environment where the students feel totally comfortable. ‘Teaching is an ability one achieves by learning from those one is teaching’ is my motto. This is why I ask very basic questions so that the students participate in classroom discussions instead of just sitting listening to me. In this way, I carry on a dialogue with the students and get their attention so that we make a connection.’

He also tries to make sure that he knows the names of all his students.

‘At the start of some terms, I say to them: ‘If I’ve got all of your names by, say, the day after tomorrow then you will remember everything I’ve told you in the course so far.’ They usually agree to this,’ says Hemin Koyi with a laugh.

‘The students like to be seen as individuals rather than a group.’

His course in tectonic modelling has attracted many overseas students over the years. Until recently, Uppsala University was the only one in the world to offer such a course as part of their degree programme. The directors of many of the world’s tectonics programmes have visited HRTL and been inspired to set up their own laboratories back home.

‘At an EGU (European Geosciences Union) conference in Vienna last spring, I met two researchers from Italy who had visited Uppsala two years in a row. After doing so, they went back home and built their own tectonics lab. One of them told me: ‘We are now copying Uppsala again. We offer a course in tectonic modelling as well.’ Being told such things and knowing that many labs have been set up by researchers who have visited and worked at the Hans Ramberg Tectonic Laboratory seems to indicate that our international influence has been quite widespread.’

Title: Professor of Tectonics and Geodynamics, director of the Hans Ramberg Tectonic Laboratory, which was registered as a separate unit within the university in 1990 when headed by Professor Christopher Talbot.

Why Uppsala? During the meaningless Iran-Iraq war in 1982, my brother and I fled Iraq when we were called up to go to the front. After living in a refugee camp in Flen, we went to Stockholm. My brother was an electrical engineer but wanted to be a doctor. He said that we had to go somewhere with a university so that we could study further. After being told that there was a degree programme in structural geology at Uppsala University, I arrived here in 1984.

Leisure activities: When I get home from work, I usually play football with my two sons, 11 and 7. This serves as both exercise and meditation for me. Sometimes I write poetry for children. I also spend time with my four siblings who also live here in Sweden.