Half a billion-year-old eggs give clues to animal origins

In a new study, published in Communications Biology, researchers from Sweden and Denmark team up to reveal eggs and embryos of animal-like fossils, more than half-a-billion-year-old, from a remote part of North Greenland. 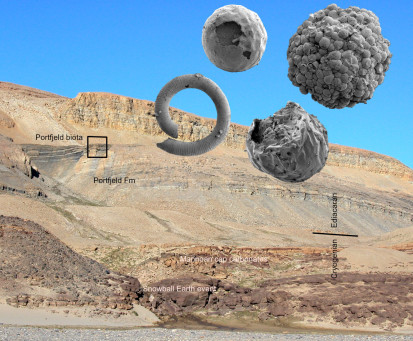 We know that animals exist on Earth by about 540 million years ago but their origins before this point have remained obscure and have troubled researchers ever since Darwin wrote “Origin of species”. From the interval of time just before the animal fossil record starts, a group of problematic large fossils with strange morphologies collectively called the Ediacaran biota, named after a remote mine in South Australia, appear as imprints on the surface of rocks in many parts of the world.

In addition to these peculiar organisms, another type of possible animal fossils can be found by dissolving rocks to reveal their microscopic contents. In the Ediacaran (635-541 million years ago), the Doushantuo Formation in China has been the only place known for preserving these microfossils with exquisite detail, down to cellular and even subcellular level. Eggs and embryos of the earliest known animals have been reported – and contested – and hundreds of scientific papers have been published on this unique biota.

Now, more than 30 years later researchers from Sweden and Denmark can reveal a second locality, in northernmost Greenland, containing similar types of eggs and embryo fossils, amongst a whole suite of other comparable fossils. The assemblage of extremely well-preserved microfossils, and its striking similarity to fossils from the Doushantuo Formation, indicates a much more complex and widespread late Ediacaran ecosystem than previously understood. At the time of deposition, North Greenland was located in the southern hemisphere and China in the northern hemisphere. Consequently, this new discovery shows that the organisms were not only locally abundant but were globally distributed just as the larger Ediacaran biota were.

Guided by these new findings, and the largely unexplored potential offered by the extensive exposures in North Greenland, prospects for better understanding the evolution of the earliest problematic multicellular eukaryotes, leading up to the first animals have significantly improved.