This is the time to seriously invest in alternative energy sources like sun, wind and water, says the International Energy Agency (IEA). 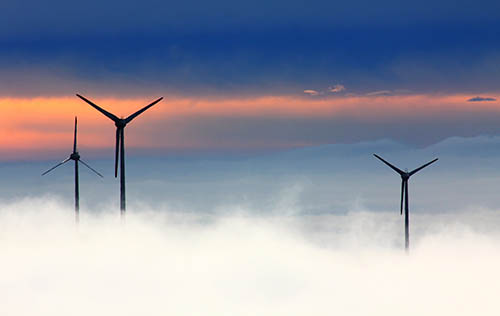 The corona crisis is affecting many markets, and not the least the energy market. Most economies today are dependent on oil. In Sweden we subsidize fossil fuels with 30 billion Swedish crowns per year. Also, the oil prices have recently fallen dramatically. What consequences will this have on the investments in alternative energy sources?

“Put clean energy at the heart of stimulus plans to counter the coronavirus crisis,” says IEA, the International Energy Agency.

Mikael Höök, Senior Lecturer and Associate Professor, researches fossil fuels with focus on oil and coal, but also supply of other natural resources such as uranium, lithium and raw materials for clean/green energy technologies.

Which significance does oil have?

- Considering the world’s energy systems, both the oil and the oil prices are very significant. Oil has been a very cheap source of energy that has been utilized in many areas, not the least for important transports that tie together the flow of raw materials, manufacturing and trade with consumers in the globalized economy. Looking back in history, the effort to secure a safe supply of energy for the public economy and for the welfare of modern society has been a vital component in many energy policies and strategies.

The oil crisis in the 1970’s caused great economic and technological changes, and changes in priorities in many countries’ energy systems. The concern of oil supply led to a steep rise in prices which in turn led to economic recessions in the west.

At that time the wish was to lessen the dependency on oil and the risk of having to import oil from unstable regions, like the Middle East, and there was an appreciation of turning to energy sources that were less prone to quick and steep fluctuations in price, with severe consequences for society. Large investments were made in natural gas and nuclear power to decrease the oil dependency in many countries.

How is the oil supply today?

USA has increased their oil production from 7.5 million barrels per day to over 15 million barrels per day. In a rather short time, USA has cut their import need drastically and has thereby redrawn the map of the global oil industry. Already in 2014 the oil prices fell from 70 dollars a barrel down to 50 dollars a barrel since USA’s rampage shook the market. That price remained around the same level until just recently. Oil exporting countries like Russia and the Organization for the Petroleum Exporting Countries (OPEC) discussed joint cuts in production to lessen the supply and thereby force the price to go up but these negotiations fell through. This in turn caused several of the world’s largest oil producers to flood the market with oil, to keep them from losing their share of the market, in spite of the price being low.

How is the demand?

- Before the coronacrisis, the world consumed around 100 million barrels of oil per day (one barrel equals 159 litres). The present crisis now causes a sharp halt of the public economy in many countries when more than 20 % of the population is in quarantine. Fewer transports, closed factories, less air flights and reduced mobility for the people has resulted in a decrease in the demand, which has other consequences. It is estimated that the demand has been decreasing with several millions of barrels of oil per day, which is a significant amount for the global market. We now have a situation where we have a large supply of oil and a weakening demand due to the abrupt halt of society in connection to the corona virus, and this has led to the prices falling dramatically. Right now, in this moment the oil price has fallen to 20 dollars per barrel. This affects car manufacturers, air lines and other industry sectors who will face financial difficulties and it might even destabilize entire oil producing countries.

How do you think the corona crisis will affect the energy market in the long run?

- The most important question for the future centers around if the measures taken in relation to the crisis will be short lived or prolonged, since this will affect the need for oil and the world´s energy systems. Right now, I believe that many are waiting to see if everything will recover as soon as the quarantines are lifted, or if this is the beginning of “a new normal” that the energy sector has to adapt to.

So far, we know too little to draw any safe conclusions other than the energy sector trying to limit their long-term risks in an energy system that is changing. If the low demand for oil continues, it is pretty safe to assume that it will give way to low oil prices in the future, taking in to account the large supplies of oil from USA´s shale oil and open faucets from other big producers.

This in turn does not automatically mean good news for renewable energy, since they have to compete against fossil fuels selling at a low price. Some analysts specializing in raw materials even speak of a possible situation where oil producers are forced to pay to get rid of their oil. If the cost for sustainable options are higher than for oil and natural gas, the sustainable companies will lose their competitiveness. This can be an important challenge to deal with.

Do you think that the present crisis will have other effects, for example how we look at sustainability and climate change?

I believe that this crisis will lead to more debates on global risks of disasters, how society can best prepare itself, and the responsibility of crisis management. It will also be important to have a holistic approach when the effects of the corona crisis are to be handled with support- and crisis packages.

IEA´s suggestion that support should be given to green energy is interesting since that is a way to mitigate the economic backlash from the corona situation. At the same time, it would create valuable input to lessen our dependency for oil in the long run. At the same time, we could get a situation where fear of pandemics and economic depression overshadow previous debates around sustainability and climate. The most important thing now is to see the connections between the challenges in society, and not revert to simple solutions to complex problems.