“Sensors will detect small movements in the rock” 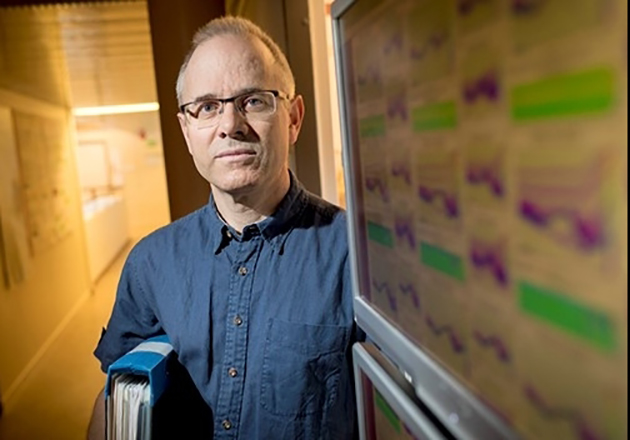 Hello to Björn Lund, seismologist, who tests sensors for the monitoring of the deep geological repository for spent nuclear fuel in Forsmark.

You work as part of the Swedish National Seismic Network (SNSN), which is run by the Department of Earth Sciences and collaborates with the Swedish Nuclear Fuel and Waste Management Company (SKB). What is your project about?

“SKB is very interested in knowing where earthquakes occur in Sweden, how they behave and what causes them. They will be responsible for monitoring the deep geological repository of spent nuclear fuel, and so of course they want to be sure that if an earthquake were to occur, they would have good information about it."

“This specific task is about designing a network of sensors that are as sensitive as possible so that they can pick up even very small movements in rock, perhaps down in the range of -2 to -3 in magnitude on the Richter scale. That would mean movement in the order of fractions of a millimetre in fractures that are a few tens of metres in diameter. This places huge demands on the equipment you choose, how the equipment works, and what analysis system you can use.”

“Borehole sensors looks like steel cylinders of between 5 and 7 cm in diameter and can be up to one metre long. You cement them into boreholes in the rock, where the sensors then detect and measure movements or tremors in the rock mass. Then you have equipment on the surface that records the data and transmits it to a data centre where you analyse the data and see if anything has happened."

“During the course of this year, we will begin the design phase and determine the location of the measuring points and how deep they should be. I can envisage that we’ll end up with a few measuring points on the surface and then some down to a depth of 100–200 metres.”

What are the challenges in this project?

“What is difficult from my point of view as a seismologist is that there are three large nuclear power plants right next to where the repository is going to be located, which means there will be a lot of noise in the rock. This is due to rotating turbines and generators and other equipment that produces vibrations that propagate down through the rock. And then there are high-voltage power lines from the power plants, which mean that we’ll register 50 Hertz of noise in our sensors. So it’s a big challenge to try to eliminate that noise and identify these very small movements in the rock mass, if any."

“Otherwise, it’s fine if there are some small movements during the construction phase that cease later once the repository is sealed. Because if we get small movements, we get information about where it’s not good to place the canisters of spent nuclear fuel, for example. In addition, we can identify possible routes for groundwater movements later when the repository is sealed. Because fractures that move are often fractures where groundwater can circulate.”

How likely is it that there could be movement or even an earthquake in this area around Forsmark?

“We know that historically there are very few natural earthquakes in northern Uppland. But experience from Swedish underground mines in Kiruna, or closer even, those in Dannemora, show that you can get fracture movements when you extract large quantities of rock from deep underground. Because the stresses increase the deeper down you go, the risk of movements occurring also increases. In many of the mines, they have had major problems from induced earthquakes, that is, earthquakes that we humans have contributed to."

“But it’s a bit different with the deep geological repository at Forsmark, because there SKB will be able to choose how rock is removed. In addition, models will be made for how to lay the tunnels in relation to the stress state in the rock mass to minimise the risk of movements and damage to the tunnel system.”

When do you see that the sensor system can be activated?

“Our objective is that the system will be built and operational one year before construction starts on the repository.. Because that way we can measure any differences at the site compared with when the project started. But the schedule keeps getting pushed back because SKB isn’t getting the go-ahead to start construction."

“And then right now, there is very rapid development occurring in seismic monitoring instrumentation because of the oil and gas industry and shale gas extraction which is based on fracturing the rock. So we’ve said that there is no need to hurry because otherwise the instruments will have time to get too old. What we build within the next few years will last hopefully for 20–25 years.  When we have a date for the start of construction, we will make sure that we are ready in time before it."

“And once SKB starts building the repository, it will remain open and keep receiving spent nuclear fuel for about a hundred years before it is sealed. So we’re talking about very long time horizons for a project like this.”