On Tuesday 8 May, the Ministry of Foreign Affairs, in cooperation with the Swedish Institute, organized the Global Swede diploma ceremony for the eighth consecutive year. 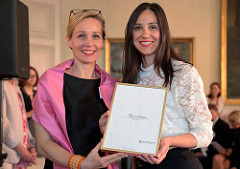 Minister of European Affairs and Trade Ann Linde, Swedish Institute Director Annika Rembe and the Head of Unit for Promotion and Sustainable Entrepreneurship Camilla Melander, UD, highlighted during the ceremony international university students who had studied in Sweden. Diplomas was awarded to 20 students from 17 countries around the world. The students have excelled in areas closely related to innovation and entrepreneurship and have shown that they are good representatives for their own country as well as Sweden.

The Global Swede award is part of a long-term vision for building and strengthening relationships with international students in Sweden.  For 7years now, the award has been presented by the Ministry of Enterprise and Innovation and Ministry of Foreign Affairs, in collaboration with the Swedish Institute. The goal is to create a network to promote Swedish trade and benefit international and multicultural cooperation.

She comes from Bosnia and Herzegovina and holds a B.Sc. in Political Science & Economics (Cairo University) for which she received an excellence award and a MA in Development and International Cooperation (Bologna University).

For the last 10 years she has been employed at the Directorate for European Integration as Head of Department for EU national assistance programme. Her professional experience is closely linked to the accession of Bosnia and Herzegovina into the EU and to the socio-economics development of the country resulting into several published articles in the political science field. Besides that she has continuously been engaged in promoting international cooperation through various programmes, such as the fellowship at the German Federal Ministry of Economy and Energy and at the European Investment Bank. She also worked for the women’s NGO BISER.

Her passion for renewable energy made her leave her advanced career and study Wind Power Project Management, supported by the IPK scholarship. Besides being an excelling student, her classmates value her positive and helpful nature highly. At conferences and with guest speakers and alumni she has shown to be outspoken and great networker. She speaks six languages and thrives in multicultural settings.